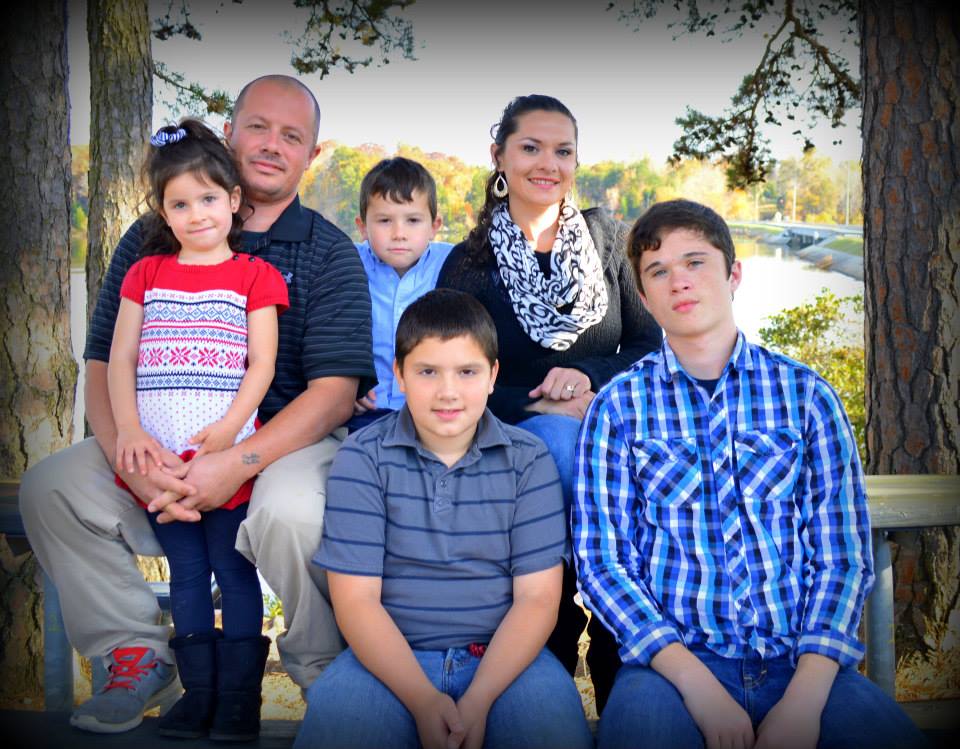 On my way south last week I made one of my planned stops in Thomasville, NC to catch up with the Traversy family. As noted in a couple earlier posts, Genevieve Traversy was the very first foster child we welcomed into our home.

When Genevieve came to live with us shortly after her 16th birthday, she arrived with an open, indomitable spirit – and her two-week old son. As I sat in her living room the other night she told me that ours was at least the twelfth home she had been placed in during her years in the foster care system. [Genevieve and her story have been featured in NH Division of Children Youth and Families conferences; a video produced by DCYF can be seen by clicking here] With a history such as hers, most people would flounder and fall into despair and addiction or worse. But God had his hand on Genevieve and wrought redemption in and through her life. Though she was in many ways a typical rebellious teenager, it was clear that there was something special about Genevieve. Even at an age when most kids were into music and fashion she was a devoted mother caring for her infant son with a tenderness not often seen. She managed the middle of the night feedings and changings and still kept up with her schoolwork, even though coming to a new home met registering at yet another new school. When we told her that we attended church every Sunday (I was after all, the pastor of a church plant at the time) she was happy to hear it and gladly attended church with our family, always open to the word of God, which had been established in her heart at an early age. Though she lived with us for only about a year, I am grateful to God that we have stayed in touch and been privileged to witness His hand in her life.

A few years back Genevieve called me to ask if I would perform her marriage to Shawn. I responded as I usually do to such requests, saying that I only do Christian weddings so I would need meet with she and her fiancé at least six times to explain what a Christian marriage is all about. To my surprise she told me that Shawn wanted that so it was my distinct pleasure and honor to take Genevieve and Shawn through premarital counseling and joining them as husband and wife. During that counseling, I shared the truth of the Gospel with Shawn, and while I believe he accepted the message intellectually, he would admit that he didn’t actually cross the line of faith until months later when they got plugged in to a wonderful church. Today, Genevieve and Shawn are parents to four wonderful children and oh what tremendous growth and transformation can be seen in this entire family.

When I showed up at their doorstep, I was welcomed with warm greetings and hugs. Genevieve had been busy most of the day, teaching at a homeschool co-op, and Shawn had been working on their ailing family van, but there was no sense that I was inconveniencing them in any way. They have a home where all are welcome. In fact, hospitality is something they practice regularly and though far from wealthy in a material sense, they are willing and eager to share whatever they have with whoever is in need.

Though Genevieve was a ward of the state from a very early age, she always made great effort to stay in touch with her birth family and cultivated relationships with her mother and brothers. As her foster parents, we understood how important those ties are and had welcomed Genevieve’s mom to holiday dinners in our home. Years after Genevieve had left our home and I was working with the homeless in Manchester, NH, developing a new collaborative project with several other agencies, I happened to spot a woman stumbling down the middle of the street early one morning. I was forced to slow down for fear she may lurch in front of my car and as I passed her I had a flash of recognition, it was Genevieve’s mom. My heart sank to see her in such a state and thought then of how much pain Genevieve must feel.

That incident took place a year or two before the call about getting married. When I showed up at Genevieve and Shawn’s apartment for our second premarital counseling appointment, Genevieve apologized for the mess saying that her mom had recently moved in with them, had accepted Christ, was sober and ready to go into treatment for the first time. Sure enough, there was the same woman I had seen stumbling down the street, standing before me, still looking a little haggard, but bright eyed and clear headed. I am thrilled to say that while I, as one who dealt with alcoholics and drug addicts daily, was a bit skeptical, Genevieve’s mom, did go to treatment, got into a transitional housing program and eventually her own place and maintained sobriety from that day forward. I attribute her success to the fact that she believed the power of God to transform lives because she witnessed that power in the transformed life of her daughter.

Those familial relationships that Genevieve fostered – her older brother Jeff, walked her down the aisle and gave her away at her wedding. Sadly, Jeff died last year and his daughter, Kaitlyn, had a very hard time of it. A few months ago she asked Genevieve if she could come live with her and her family. After praying together, Genevieve and Shawn agreed to have her come. Kaitlyn has also come into a relationship with God as a result of this loving families example and is flourishing in her new life.

The baby who I first met at two-weeks of age is now almost 16. He is smart as a whip and taking college courses offering credits toward his high school diploma. He will likely complete his home education and graduate soon. He is extremely tech savvy and is producing music and music videos of amazing quality. His younger siblings are excelling in their own rights (congratulations again to Kahleb, whose football team just completed their second undefeated championship season) and like so many homeschooled siblings I have known, have their squabbles but are clearly devoted to one another. This entire family stands as a wonderful testimony to God’s amazing grace and reflect the nature, character of love of Jesus in virtually everything they do.

Thank you Traversy’s for offering this wandering preacher a place to lay my head for the night and sharing your lives with me.