This is the Site for Church Under the Bridge

Beneath Interstate 35, between 4th and 5th streets in Waco, TX, sits an egg shaped island of concrete covering about ¾ of an acre. Most days it’s just a vast oval of cement but come Sunday morning it is transformed into a little slice of heaven.

Lining up for a Spaghetti Dinner at 10:30 am

Vans and pick-up trucks pulling trailers that have been fitted for special purposes begin pulling up on this island an hour or two after sunrise. Out come the portable stage, sound system and instruments for the worship team. Off another trailer with custom racks come the metal folding chairs for the congregation and plastic tables for the meal to be served by a visiting church from the region. Nearby the serving tables one finds a few more tables where those who desire can sign up for small groups or grab helpful resources and information or buy their very own Troll t-shirt.

At yet another set of tables one might find a youth group from another area church preparing to pass out fresh fruit and water. 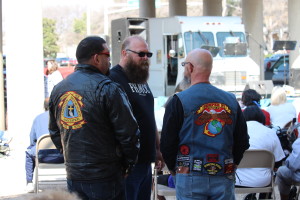 Some of the Regular Bikers

As it becomes obvious that a gathering is going to take place more vehicles begin to arrive. Cars, trucks motorcycles and scooters begin to line the outer edge of the island and pull under the shelter of the southbound lane of the highway. As space becomes scarce, folks start parking in a vacant lot across the street or along the side streets to the east and west. Before you know it, people (and a few dogs) who have driven, ridden and walked are gathered together as the body of Christ. 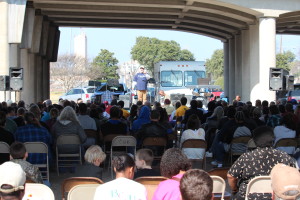 While many churches may have a sign in front of their’ buildings indicating that “All Are Welcome”, few appear to believe that. However, the people gathered under the bridge seem to know this fact without any sign telling them so. Those who’ve come together represent all social and economic strata. There are plenty of middle class looking people one might find in your average church, more than a few rough looking bikers, those clearly down on their luck and homeless struggling to survive, alongside corporate executives, business owners and other people of means. Throw in a few college students and professors from nearby Baylor University, and consider that in each of the above categories one finds every shade of skin color and we indeed find a little slice of heaven. Or at least, what heaven will look like one day, for those who have put their trust in the atoning sacrifice of Jesus, the Christ.

Having reached the approximate halfway point in my journey, both in terms of time and miles, I find I have been blessed in ways I never would have imagined. In almost every state or region I have been, I have found some deep, deep pools, where people of faith, acting in obedience to the Word of God and His will as it has been revealed to them, are marvelously impacting the communities around them and reflecting the nature and Character of Christ. 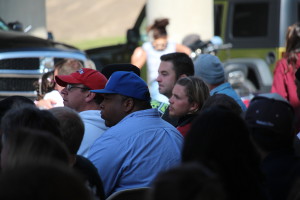 While I have many miles to go and many more regions to explore, I have a slight fear I may have peaked here in Waco. Between all the programs of Mission Waco, the incredibly authentic Church Under the Bridge and the cooperation from other churches in the city, I find it hard to believe I could find anything that better represents what I set out to find.

That statement should not detract in any way from the people and places I have been to date, nor do I expect it to leave me disappointed in what is yet to come, it is simply that almost everything has come together here in Waco.

Though the opening paragraphs of this post along with the photos might give you a limited picture of what you would find if you were to make the journey here yourself, let me take a few minutes now to share the stories of some of the people I met who have been touched by this church without walls 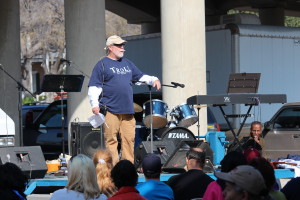 Because Jimmy introduced me at the Friday breakfast and again from the platform on Sunday several people came up to me to chat face-to-face. While all were interested in the story of my trip many  others were equally anxious to share with me the impact this church has had in their lives.

When I shared with one man that I had been the director of a transitional housing program for men in recovery, he said, “Oh cool, I’m in recovery.” He then went on to share the heartbreaking story of his downfall and his journey back. Fourteen years ago his ten-year old daughter was raped, beaten and killed. The shock, pain and emotional upheaval of this tragic loss were too much for him to bear. He began to drink heavily and when the alcohol could not numb his feelings he turned to drugs and then more drugs and more booze and anything at all that might provide a moment or two in which his tortured mind didn’t picture her beaten body.

Pastoral Care and Prayer Prior to Service

Living in an almost constant stupor, going to church didn’t even enter his mind. Then one day, about five years ago he happened across this open-air church. No one seemed to look down on him in his inebriated state. Instead he found a place of welcome and love and slowly began to realize that there was a better way and that he could move on with his life. He didn’t act like suddenly everything was better, but over time he found new ways to cope and a glorious new life in Christ.

At the ball field Sunday afternoon (It just so happened that this past Sunday was CUB’s annual “Toilet Bowl” touch football game and Chili Cook-off) another man approached me to wish me well on my journey and told me the story of his family moving to Waco so they could be a part of this church. He explained that his son was born with developmental disabilities and as a Christian family they tried to live their lives as normally as they could, continuing to attend their church and treating their son with respect and dignity. As the boy grew, however, they found it hard to keep him still and quiet during service. He would get up and wander about and occasionally try to walk up on the platform and grab a microphone. One day the pastor spoke rather harshly to him, and while he could understand that his son might cause others to be distracted, he felt hurt and dejected.

On a visit to Waco, the family attended Church Under the Bridge. Though many are seated and focused on the music and the message, there are still quite a few people who are milling around during the service, so the boy was not alone in his wanderings and not the distraction he was considered in his home church. At one point the boy’s wandering led him to the edge of the stage and he headed for the stairs to climb on up. As his father dashed to stop him, Janet, the pastor’s wife and worship leader said, “It’s okay, he can come up here if he wants to.” 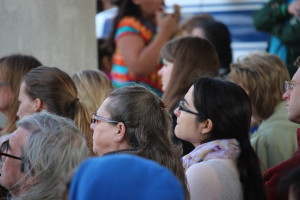 All Ages and Backgrounds

Imagine the feelings that rushed through that father. The son that he loved was not seen as a distraction or a nuisance or a problem, instead he was accepted and welcomed. Immediately the family began to make plans to move to Waco.

A woman I bumped into in the parking lot told me how she had been a member of a fairly fundamentalist church and didn’t really fit in. She tried another church that was a little less dogmatic and for a time felt comfortable, but subsequent moves and a search for another church where she felt she belonged proved difficult and she was about ready to give up on church altogether. Then she found Church Under the Bridge, where the Bible is not only preached, but is also lived out effectively in the context of community. Today she is a small group leader within the church and loving every minute of it.

These are just three quick snippets of what I have a very strong notion, represent dozens of similar stories that could be told were I to stick around Waco for any length of time. Part of me would love to do just that; hang my hat here for a while and learn these stories first hand, but to paraphrase my fellow Granite Stater Robert Frost;

“The church is lovely, bright, and deep,

But I have promises to keep,

And miles to go before I sleep,

And miles to go before I sleep.”