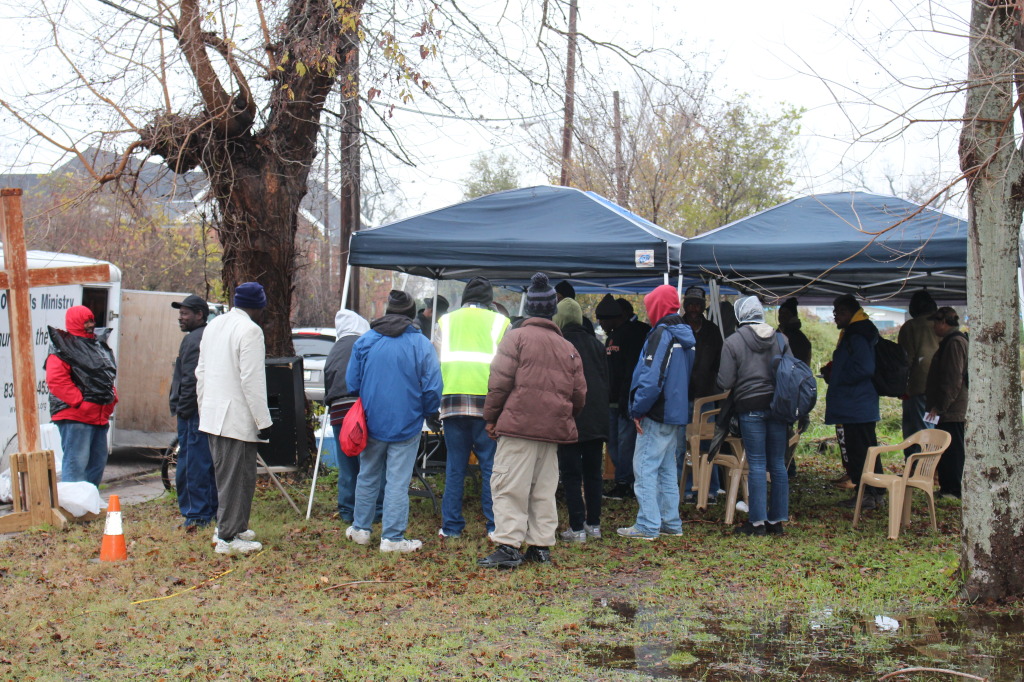 Lining up for a meal following the service

In Part I of this post I was pretty harsh concerning the church I visited in Baton Rouge, but I believe with good reason. You see, several times now on this journey I have spoken at length with people who have a Christian background and who will quite willingly tell me that they still believe, yet for a variety of reasons, they have become disenfranchised from the church of their youth. Some tell me that the church has become too political; others say the church is all about money or about power or cite the issues of child abuse and molestation among the clergy. Still others say it’s just so empty and irrelevant to their daily lives. They tell me they are sick of the prosperity gospel or the feel good gospel and are hungry to be challenged and called to something more meaningful.

So it is with the Holy Spirit’s conviction in my own heart that I say to all churches that are just happily going through the motions, providing services to the people who are already in, but doing little to meet the temporal and spiritual needs of those without, it is time to wake from your slumber! It is high time you/we start reflecting the nature and character of the Christ who is revealed to us in Scripture, for we are called to be his ambassadors, not his gatekeepers

When I review the history of the Church of the Nazarene, I find a denomination very different in its early days from what it has become today. I remember distinctly during my preparation for ministry a class in which we discussed the life span of a movement. I don’t claim to be an expert on organization lifespans but here is what I remember from our discussions and personal study

Everything starts with an idea. When an idea is shared and embraced by others, if it significant enough to create action, then two or more people band together to create a movement. As the movement gains momentum and grows in the number of participants, while it may seek to avoid the trappings of an institution, it soon becomes clear that without some sort of structure it becomes chaotic and ineffective. Thus rules and some form of organizational authority are developed. Over time, as the organization continues to grow and diversify, the original catalytic idea or ideal is all too easily forgotten. It is at this stage that the organization has become an institution. Institutions become their own life form and rarely look anything like the original idea or movement.

Now, let me share with you the words of Dr. Phineas F. Bresee, a Methodist minister of the late 1800’s who along with his friend Dr. J.P. Widney and eighty additional charter members, started the movement that became the Church of the Nazarene: “We were convinced that houses of worship should be plain and cheap, to save from financial burdens, and that everything should say welcome to the poor. We went feeling that food and clothing and shelter were the open doors to the hearts of the unsaved poor, and that through these doors we could bear to them the life of God. We went in poverty, to give ourselves – and what God might give us – determined to forego provision for the future and old age, in order to see the salvation of God while we were yet here. God has not disappointed us. While we would be glad to do much more, yet hundreds of dollars have gone to the poor, with loving ministry of every kind, and with it a way has been opened up to the hearts of men and women, that has been unutterable joy. The gospel comes to a multitude without money and without price, and the poorest of the poor are entitled to a front seat at the Church of the Nazarene, the only condition being that they come early enough to get there.” (Emphasis mine) (Phineas F. Bresee: A Prince in Israel, E. A. Girvin)

The movement that began nearly 120 years ago is now an institution. I am happy to report that there are still Nazarene churches that reflect the work and ideals of the original movement, but I fear they are too few and certainly not the norm.

I pray that by now I haven’t bored you to tears with sociology and griping. All the above I feel was necessary to set the stage for what I witnessed and experienced at Church Under the Bridge. 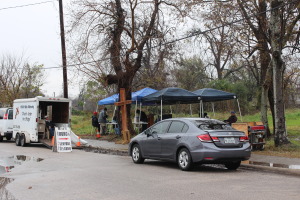 From Vacant Lot to Church

As noted in my previous post, after confirming that I had the correct address and arriving back on location, I found a small team at work setting up church, where just a few short minutes prior, had been a vacant lot in an impoverished and dangerous neighborhood in Houston. While there were a few volunteers from a supporting church or ministry, the majority of the work was being done by those who have been reached through the ministry of the church and are in the discipleship program.

As the time for service drew near, one could see the congregation gathering, shuffling in from all points of the compass. They were all dressed in multiple layers, with several sporting black plastic trash bags as their outerwear, hoping for some measure of protection from the rain. Most carried small backpacks with the remainder of their worldly goods. A few rode bicycles but the majority were truly pedestrian. Just as the make up of the neighborhood is predominantly African American, so were those present, with a few of apparent Hispanic origin and perhaps three white guys. Needless to say, this white guy, with the silver reflective strips on his motorcycle jacket, moving around snapping pictures of everyone and everything kind of stood out. Yet, I felt less like an outsider here amongst the homeless than I had in that comfy church in Baton Rouge. 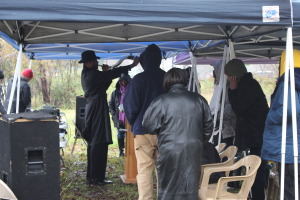 As we huddled together under the pop-up awnings the worship service began with prayer and readings from both the Old and New Testaments. Then the guest speaker, Tyrone Obaseki, was introduced and he stepped forward. Here was another who appeared almost as out of place as I. He was dressed in fine clothes with a black trench coat and sweet black fedora. He stepped to the pulpit and blew a Yemenite Shofar, something that has become popular in some circles as a call to worship, signifying a call to battle or spiritual warfare.

Tyrone spoke to the men (and few women) with boldness and authority, declaring their need to choose whether to continue down a path of destruction and despair through drug abuse or to turn away from sin and turn to Jesus as the solution. He was open and honest about his own past, having been raised in the foster care system from infancy to adulthood, experiencing homelessness and drug addiction first hand. He had been in their shoes, yet found deliverance and had no problem calling them to repentance. (I wish I had space to share more of Tyrone’s personal story. To read more from his website, click here.)

Following the message, pastor Kenneth stepped forward and reinforced the call to repentance, challenging all present to choose the better way of Christ and specifically inviting them to join in a prayer of repentance if they chose to turn things around. After that we gathered together to celebrate the Lord’s Supper. Several chairs were removed in order to allow folks to come forward to receive the elements. The pastor encouraged everyone to gather close, as communion is a special family time and so we all stood, shoulder to shoulder with wafer and cup in hand, joining together in the Lord’s Prayer. As I stood in this throng, repeating those familiar words that I have uttered countless times in my life, I found myself moved to tears. I didn’t understand why then and have thought about it several times since. Perhaps it was merely being in the presence of many for whom “daily bread” is an earnest concern. Perhaps, if I am totally honest, I felt a slight sense of superiority and was feeling grateful for the privileged life I have been given.

In my final analysis, however, while both of the above were factors in my emotions, I am convinced it is the hardships I have faced in recent years along with the minor deprivations I have experienced on this journey that cause me to truly hallow my God. To know that he knows my needs and promises to meet them daily, that he calls me to extend forgiveness, just as I have received it from him. Understanding that he desires to set me free from all evil and that every aspect of that familiar prayer is possible because Jesus, a man without sin, became sin for me, paying my debt on Calvary.

The conclusion to this Tale of Two Churches is simply this: For me, Church Under the Bridge did far more in helping me to see the face of Christ and is a better representation of my own church’s heritage and the New Testament ideals to which I believe we are all called, than the comfy, cozy suburban church that has become so much of main stream Christianity.

Here is the call of God that Bresee was anxious to extend to all he met:“Come unto me, all ye that labour and are heavy laden, and I will give you rest.Take my yoke upon you, and learn of me; for I am meek and lowly in heart: and ye shall find rest unto your souls.For my yoke is easy, and my burden is light.” (Matthew 11:28-39 KJV)

May the western church wake from its slumber and extend this call once again!