As I trust is coming through in some of my writings, my horizons have been expanded and my world-view is being reshaped on this trip. I have met some people and attended some churches that are very different than my rather traditional white, middle class history. Though traditional, I have always considered myself fairly open-minded. I know some who know me well, including my children may laugh at that notion, but it is true. It is entirely possible to be open-minded, yet conservative and opinionated. Now, stop laughing, I have something very important to share with you all.

Following my time at Heaven’s Way Biker Church I began my westward journey. By the following Sunday I had been settled in for a few days in Baton Rouge, LA and since I hadn’t come across anything unique looking, decided to attend the local church of my denomination. Being in Baton Rouge, I expected a church of some diversity, instead I found a church that epitomized white middle class-ness, and I felt oddly uncomfortable. Why? I wondered. Here was a church that not too many years ago I might have dreamed of pastoring. The people were friendly, the music was familiar, I knew when to stand, when to sit and how to behave at the artificially friendly greeting time. I’ll admit, I was a bit underdressed in jeans and a t-shirt but as I thought about it, I knew that wasn’t the cause of my discomfort. Was it that feeling of being an outsider? Well, sort of, but then again, I have been an outsider everywhere I have been on this trip. The thing is I didn’t feel like an outsider in those other places, only here. Then it hit me, just how artificial, plastic and contrived it all felt to me. I feel terrible even saying this because I believe the people were basically sincere in their worship, or wanted to be at least, but couldn’t see just how programmed they were. It was so much like I had grown up with, yet it left me cold. Cold isn’t even adequate – more like frostbitten. When church was over I couldn’t get outside to the fifty-degree dampness fast enough to warm up a little.

I considered writing a post just about this experience but remembered the old adage on which I grew up; “If you don’t have anything nice to say, don’t say anything at all.” So I held my tongue (or fingers if you will) and refrained. However, my experience the following Sunday has caused me to realize that sometimes you have to call out the cold deadness. Even Jesus declared: “Woe to you, teachers of the law and Pharisees, you hypocrites! You are like whitewashed tombs, which look beautiful on the outside but on the inside are full of the bones of the dead and everything unclean. In the same way, on the outside you appear to people as righteous but on the inside you are full of hypocrisy and wickedness. (Matthew 23:27-28 NIV) Perhaps that quote is a bit strong for what I experienced, as I don’t think the folks at that church were quite as dead in their faith as were the Pharisees, but if they do not wake up, they will be soon.

As I progressed through the next week, I continued to find myself battling unseasonably cold weather in Texas. Seriously, who would have thought I would need to wear the arctic rated underwear, I normally use when hunting in New England for a few days of camping in South Texas? Perhaps the physical cold and its attending misery are symbolic of everything I want to leave behind that is less than genuine in terms of my Christian faith.

Now we come to Church Under the Bridge. A slight misnomer, as the church no longer meets under the bridge, but it’s where they started. However, the bridge in question is part of a fairly busy interchange and the crowds grew too large, so for safety reasons the city asked them to find another location to meet. Today, the church meets in a field owned by another church not far from the bridge. 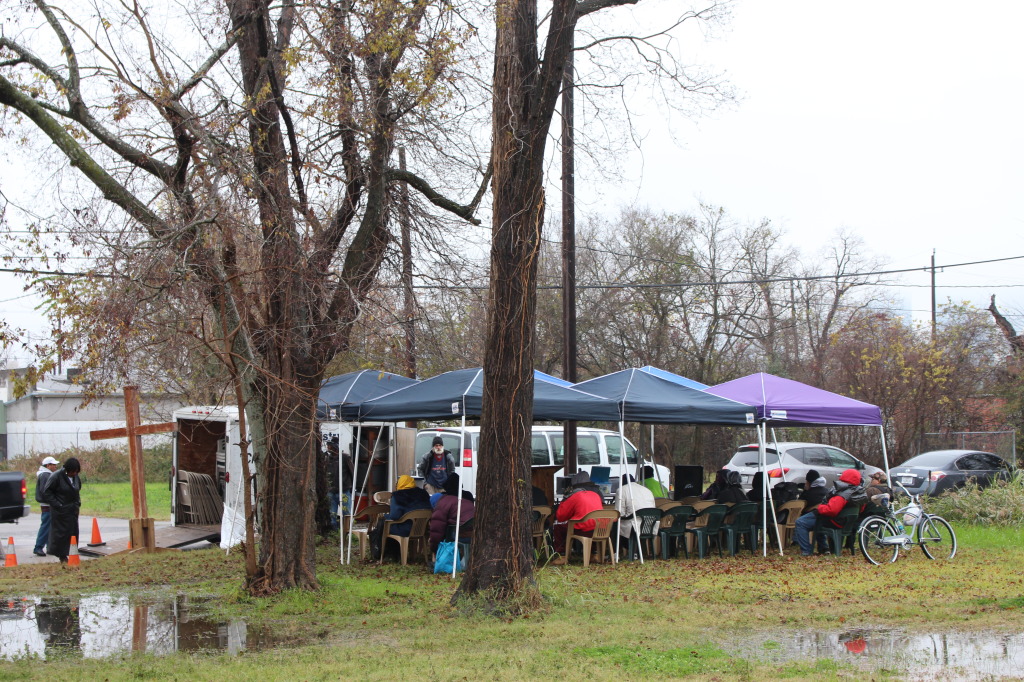 I had discovered this church online, while researching another church in Waco that I am planning to visit soon. All I had was an address, which I plugged into my iPhone setting off from my campsite about 42 miles south. Not knowing exactly where I was going, I left plenty early. When my phone indicated that I had arrived at my destination I found nothing to indicate that I was where I wanted to be. Since this location also happened to be on the edge of Houston’s Third Ward, ranked number fifteen in the most violent neighborhoods in America, I knew it was not where I wanted to be without a clear purpose for being there. 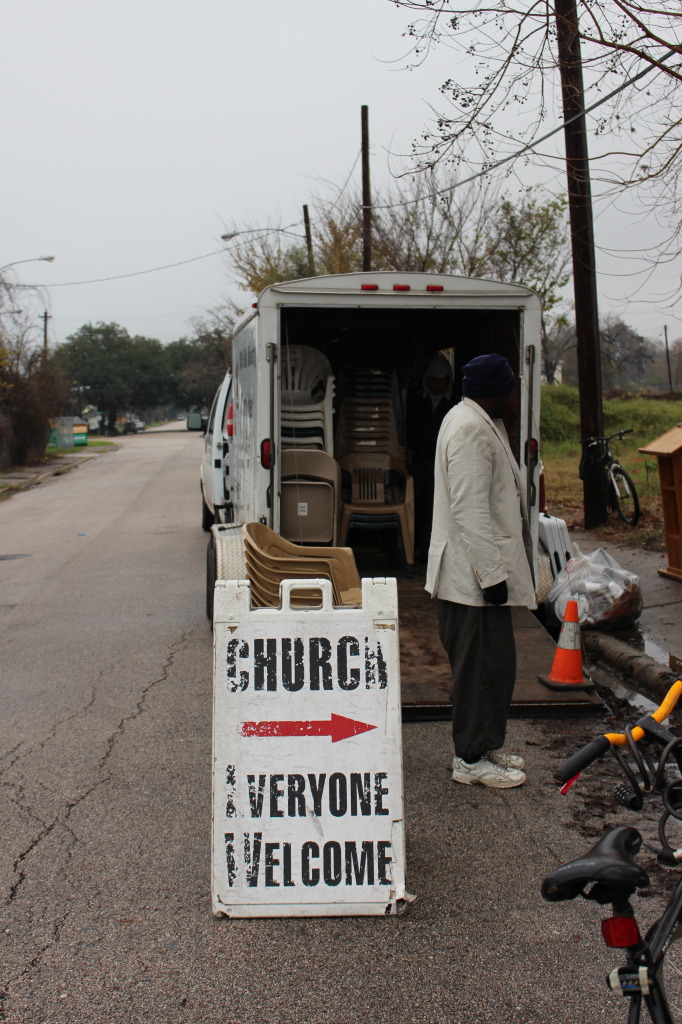 I headed off in search a friendly and safer feeling place and found a Starbucks (yes, I understand that my white middle class-ness is shining through) several blocks away. I accessed the net to make sure I had the address correct and according to the ministry’s website, 1000hills.org, I was indeed in the right place, so after a quick cup of coffee, I headed back. Upon my return I found a small group setting up for church. Out of a van and small trailer, emerged a generator, a portable sound system and laptop computer, several portable instant canopies, stacks of plastic chairs, a few folding tables, a large cross and an a-frame sign that simply read, CHURCH – EVERYONE WELCOME.I have done church planting on a shoe-string budget before, but this whole packaged church, which by-the-way is set up and taken down in this location, 7 days per week, I would ball park at about a $10,000 cost, including the van and trailer. I tracked down the pastor to introduce myself and ask permission to take pictures. He greeted me warmly and told me to feel free to take all the pictures I wanted.

It was a cold, rainy day, which I know affects church attendance anywhere, but I assumed one that met outdoors might be particularly impacted. The seats were better than 80% filled, (which church growth experts say is really full, since people prefer a little personal space. Ah, see how they love one another.) I estimated the crowd at 60 to 70 but the pastor told me they usually run closer to 90 to 100 at every service. Again, that’s not just this Sunday afternoon service, but they meet in this same spot Monday through Saturday at 7:00 pm. Furthermore, this same ministry hosts Church in the Park, Wednesday through Saturday at 9:30 am, and Church in the Driveway, Monday through Friday at 7:30 am and Sunday at 10:00 am. The Driveway Church by-the-way, meets in the driveway to their Disciple Houses program, which rather than trying to describe myself, I will just share this statement from their website: “Our Disciple Houses are a residential living program for men working to get off the streets, who accept Jesus Christ as Savior and have a burning desire to serve God and work hard. The men are trained and discipled to work in the ministry, or receive support in learning skills for secular jobs.”

So, did you catch those numbers? This ministry is conducting 18 Bible preaching church services every week! Plus running a discipleship housing program and planting churches in Latin America, Columbia, Africa and elsewhere around the globe. Oh, guess what else. At every one of those services, they serve a meal to everyone who comes!

This place is the real deal, this is Christianity in action and in my next post I will share more about the authentic reflection of Christ I found in this church and it’s pastor.