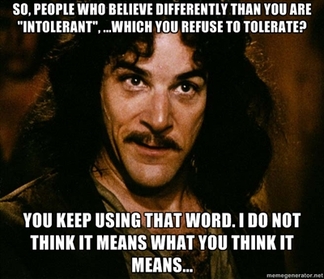 As I scroll though my facebook feed I am often struck by the fact that I have an extremely diverse set of friends. I see this fairly often but I don’t think it has ever been more apparent than in the past couple of days since the Supreme Court’s decision about The Affordable Care Act and Hobby Lobby. Often this diversity pleases me – I am very glad that despite our differences I am able to stay connected and friendly with people who hold different (at times extremely different) views than I.

Yet, the polemic I witness is, at times, disconcerting, and I am beginning to believe that very few people give a rip for reality anymore. Truth has become positional rather than factual. From the left I hear cries of this decision being a violation of the separation of church and state and a sign that we are heading toward the establishment of a Christian Theocracy.  Don’t you think that might be just a tad hyperbolic my friends?

First of all the phrase “separation of church and state” is nowhere found in the Constitution.  When the words are uttered, most people are thinking of the First Amendment, which states simply: “Congress shall make no law respecting an establishment of religion, or prohibiting the free exercise thereof; or abridging the freedom of speech, or of the press; or the right of the people peaceably to assemble, and to petition the Government for a redress of grievances.”

What most people don’t understand is that the concept of the separation of church and state originates in a struggle that Baptists, as well as Presbyterians and Methodists, were having in Virginia, where the official state religion of the time was Anglican (Episcopalian). These decidedly Christian denominations, that were being discriminated against and persecuted, petitioned men such as James Madison and Thomas Jefferson who gladly took up the cause to provide religious freedom. For those interested in the facts, you may read more about The Virginia Act for the Establishment of Religious Freedom (1786) by clicking here.

From the right (that would be primarily the Christian right) I hear hallelujahs and amens and “take that you liberal bastards!” I get a picture of a group of people sitting around in a Bible Study suddenly jumping up, doing celebratory chest bumps and high fives… Okay, maybe that’s my own little bit of hyperbole, but my point is, I am seeing more self-congratulatory rejoicing than love and tolerance, salt and light. I could cite verse after verse that tells us to take a different approach but for the sake of space I offer the following two passages:

Do not repay anyone evil for evil. Be careful to do what is right in the eyes of everyone. If it is possible, as far as it depends on you, live at peace with everyone. Do not take revenge, my dear friends, but leave room for God’s wrath, for it is written: “It is mine to avenge; I will repay,” says the Lord. On the contrary:

“If your enemy is hungry, feed him;
if he is thirsty, give him something to drink.
In doing this, you will heap burning coals on his head.”

[For the sake of clarity, please understand that to “heap burning coals” on someone’s head refers to giving them a source of fire that was needed in the days before strike anywhere matches and butane lighters. It does not mean to set their head ablaze.]

Or perhaps we should consider these words from Jesus’ Sermon on the Mount:

“You are the salt of the earth. But if the salt loses its saltiness, how can it be made salty again? It is no longer good for anything, except to be thrown out and trampled underfoot.

You are the light of the world. A town built on a hill cannot be hidden. Neither do people light a lamp and put it under a bowl. Instead they put it on its stand, and it gives light to everyone in the house. 16 In the same way, let your light shine before others, that they may see your good deeds and glorify your Father in heaven.”
(Matthew 5:13-15 NIV)

Now I will leave you all with these words from 1 John 3:18: let us not love with words or speech but with actions and in truth.