While I have made mention of him in a couple of Facebook posts, I feel the need to share a little more about my friend James “Cochise” Powell, as my meeting of Cochise has been a significant factor in the places I have been and some of the people I have met in the past few weeks.

My first encounter with Cochise was an interesting happenstance in itself. When I started this trip I said that I was relying on God to direct my steps and what an adventure it has been. It was a Friday afternoon in Daytona Beach several weeks ago and I had yet to find much in the way of unique, effective ministries. I had decided to try to enjoy my evening and began a search for some live music. That’s when I found Jakob’s Well and met Ray and Susan Kelley, whose story I already wrote in my post, “Just Crazy Enough to Do What He Tells Us to Do.” Ray told me about Jeremy Folmsbee and the beachside service he conducts at Sun Splash Park for the homeless and folks who live in a supportive housing facility across the street from the park. It was at that service that I met Pace Allen, a Christian Attorney, who invited me to a men’s prayer breakfast at First Baptist Church. Following the breakfast and a study on God and Country, I found a group of five or six men chatting about spiritual things and decided to pull up a chair. Sitting across the table from me was a man who was clearly looked to as an authority by the others in the circle. He was dressed casually with a black driving cap on backwards atop his longish salt and pepper hair, sporting a neatly trimmed goatee with tattoos up and down both arms. This was my first encounter with Cochise and I immediately sensed a need to talk further with him about my mission.

I left Daytona later that day in order to head to Virginia to celebrate Thanksgiving with two of my sons. When I returned a few days later I decided to attend Cochise’s service at Set Free Church. Though not specifically a “Biker Church” Set Free is a church that is geared toward reaching those who might not feel comfortable in a more traditional church. I was warmly greeted at the door and walked in to a meeting room with about 25 -30 people milling about and settling in for the service. For me, the service was oddly nostalgic, taking me back to my own church planting days. I say “oddly nostalgic” because I don’t always look back with fondness on those often, difficult days. However, somehow already on this journey, I am seeing the organic nature of that work in a very different light. (Perhaps I will have more to say on that subject later)

For those of you who perhaps haven’t been to church in a while, things have changed. As a child in a mainline church, we always had a choir. When I went back to church (an “evangelical” church) in the late 70’s I found the same formula with which I grew up, albeit a little more upbeat and less somber. Nowadays, most contemporary churches have a “worship band” instead of a choir and the words of the songs are projected on the wall or a giant screen in lieu of hymnals. In church planting, however, you have to be creative and work with what you’ve got. Set Free Church uses a laptop and projector with recorded music. We sang along to old songs like “Victory in Jesus” “I’ll Fly Away” along with other Christian classics. It just felt good to a middle-aged guy with a bass voice who sometimes struggles with the modern stuff that seems written for (if for men at all) men with a higher range.

At Set Free Church the people were friendly, casually dressed and appeared well aware of their shortcomings; there was no pretense and no facades. The message was solidly Biblical and Cochise was very engaging with his congregation. The music was familiar and the fellowship warm and inviting. In my spirit, I sensed the presence of Christ. 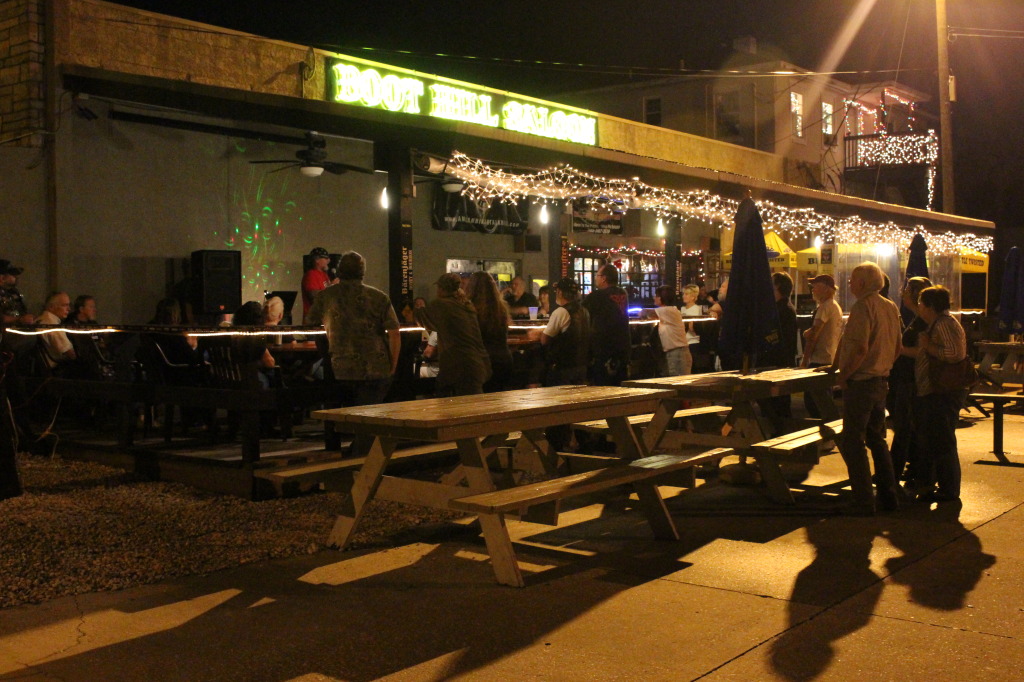 As further evidence of his desire to reach those who may be disenfranchised from traditional forms of worship, on the fourth Sunday of every month, Set Free Church meets early so they can conduct an additional service at Boot Hill Saloon, a popular biker bar amongst several such bars along Main Street in Daytona. Thanks to the relationships that have been built at Boot Hill, Cochise was invited to conduct a Christmas Eve candlelight service. Though I had already gone south, I decided it was worth a few extra miles to be able to attend that service, so as I headed north in preparation for my westward journey, I cut back across Florida in order to enjoy this unique setting for the celebration of the birth of Christ.

Thanks to this servant of God, I have also had the pleasure of meeting his friend Bobby Wells in Fort Myers, who sent me to see Robert Happoldt, pastor of Heaven’s Way Biker Church in Cottondale, FL. This network of unconventional, ambassadors for Christ has been a wonderful blessing to me on my journey and opened my eyes further to the truth of 1 Corinthians 1:26-30 which reads: “Brothers and sisters, think of what you were when you were called. Not many of you were wise by human standards; not many were influential; not many were of noble birth. But God chose the foolish things of the world to shame the wise; God chose the weak things of the world to shame the strong. God chose the lowly things of this world and the despised things—and the things that are not—to nullify the things that are, so that no one may boast before him. It is because of him that you are in Christ Jesus, who has become for us wisdom from God—that is, our righteousness, holiness and redemption.”