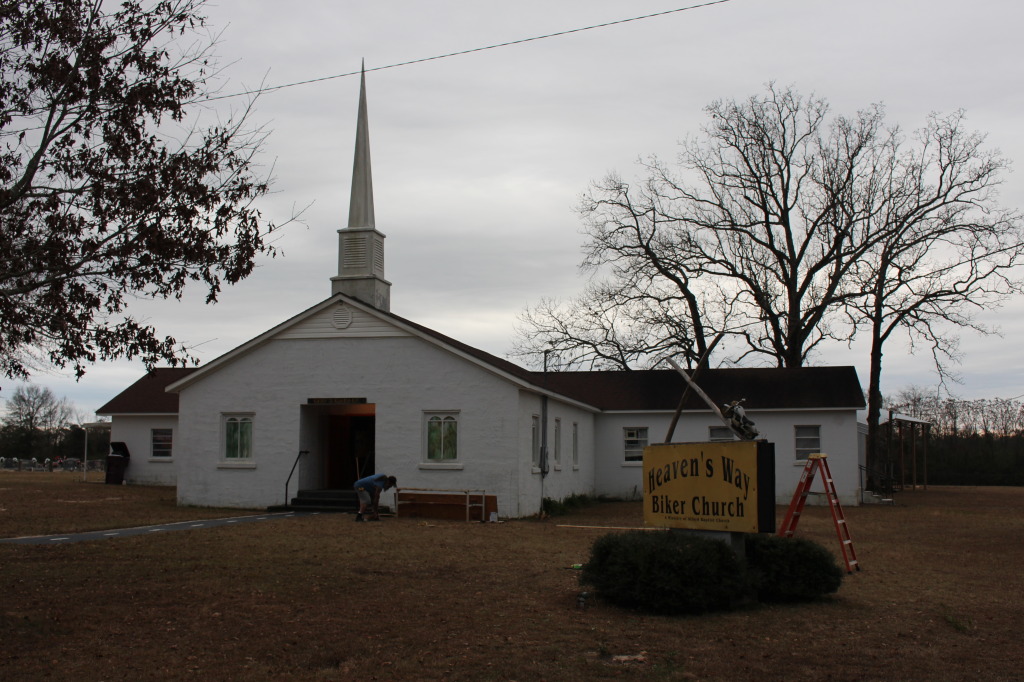 Pastor Robert cleaning up after a day of work

For those of you trying to follow this story, please allow me a few moments to refresh your memory and mine as to how I came to Heaven’s Way Biker Church to begin with. I met Cochise in Daytona Beach and he suggested I stop in to see his friend Bobby Wells in Fort Myers, when I was down that way. Bobby and his wife Michelle provided me a guest room in their home a few weeks later and Bobby told me about Robert Happoldt and HWBC. Now I had never met Robert but through Bobby’s friend suggestion on Facebook, we shared a few messages. I had asked him if there was any place at the church where I might be able to hang my hammock or otherwise crash for the night as I came through the Florida panhandle and he simply told me to call when I hit town.

As someone who has planted churches, worked with people with addictions and spent ten years running a transitional housing program for men in recovery, I think I have seen and experienced quite a few things that many pastors never do. Yet, as I wrote in Part I of my Heaven’s Way Biker Church experience, nothing could have prepared me for what I found in Cottondale, Florida.

Having ridden all day on mostly backcountry roads from Daytona across the northern tier of Florida, I stopped in Tallahassee for the night and let Robert know I would be arriving some time on Saturday. He asked me if I preached and when I assured him I did, he simply said, “ This Sunday 2PM Biker Church.” That was my first clear sign, that this a faith based ministry as very few pastors would dare to invite a perfect stranger to stand in their pulpit. Arriving in Cottondale, I called Robert for specific directions.

To get a general sense of things, one must understand that Cottondale, FL is a poor, rural community. Located roughly 75 miles west of Tallahassee and 40 miles south of Dothan, AL, the nearest city. Cottondale proper boasts a population of just over 900 residents with a median household income of less than $19,000 per year. To put that in perspective, the median household income for the state of Florida is a little over $45,000. These and other factors combine to make this community a natural breeding ground for alcohol and drug addiction along with the other social ills that normally accompany substance abuse.

The center of town lies about three miles off Interstate 10, and then Heaven’s Way Biker Church is another six or seven miles out country roads at the end of the blacktop of Woodcrest Rd. As I pulled up, I found Robert, Wayne (who has been living at the church for almost two months and Nemo (a fellow sojourner, though traveling on two feet instead of two wheels) working out front, rebuilding the church sign. Robert greeted me, suggested I pull my bike around back, gave me at the nickel tour of the facility, showed me where to put my things then went right back to work. 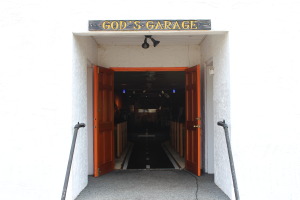 What they have done is simply amazing. Old Sunday school classrooms have been converted to bedrooms and a shower has been installed between the bathrooms and the baptistry. Since the bedrooms were fully occupied, I was provided an inflatable bed set up in the sanctuary which doesn’t look like any sanctuary I have ever been in before. The center aisle is painted black with a dotted line down the middle, the pulpit is a black 50 gallon oil drum with a small wooden podium on top. The back walls are covered in original artwork depicting a Biker riding up a cross and a highway as backdrop for the baptistry. For additional decorations we find a skeleton in a rocking chair and a bedpan guitar along with various and sundry motorcycle parts, road signs, and license plates hung about. 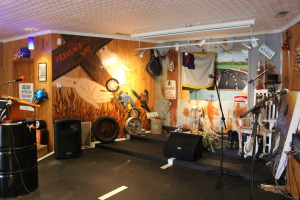 All Artwork Courtesy of Bobby Wells

As soon as I unstrapped and stowed my gear I went back out front with my camera to begin the important act of chronicling this place. After getting some initial shots I joined the work party, not because anyone said I should, it simply felt like the right thing to do. After painting and sealing the plywood, we mounted it to the framework over the old granite sign of Pilgrims Rest Baptist Church.

As dusk began to fall we all headed inside and I met more folks who were staying at the church. I met Tina who was traveling with Wayne from Indiana. John, a guy on a sport bike from South Carolina, and K.R., a Lakota Indian who for some reason found himself in crisis in Cottondale.

Alicia had come over and offered her greeting as well, then after digging out a bunch of food from the pantry and the refrigerators which Tina set to work turning into our dinner, Robert and Alicia went back across the road to the parsonage. Wayne has a job washing dishes at a little Mexican restaurant in town so Tina prepared dinner for the rest of us. Setting it all out on the counter, we gathered into a circle and held hands for the blessing, which was led by K.R.

As dinner drew to a close, people just started getting up and taking care of cleanup. I have been in churches where everyone knows each other and knows their way around the various tasks that need to be performed, but I have never seen anything go smoother in my life. Here we were, five travelers from very different backgrounds, on separate journey’s working in near perfect harmony. As the newest “member of the family” I assumed they had been working together this way for a long time, only to discover that K.R. and John had only been around for a week and Nemo for two with Tina (and Wayne) the longest in residence at about 8 weeks. I felt so welcome, so comfortable, so at ease that I knew instantly, only the Holy Spirit can bring this kind of unity amongst veritable strangers

Over the next couple of days I had the opportunity to get to know these folks a little better. Unfortunately K.R. was suffering with a terrible toothache due to a lost filling and slept most of the time I was there so I didn’t get much of his story, but this much I came to understand. He was a traveler in need, was provided food and shelter along with a scheduled dental appointment to address his most pressing need. He was loved and welcomed and grateful in return.

John had been traveling for some time but apparently found himself out of funds to continue his journey. Finding HWBC as a temporary home he went out in search of work and found employment as a cook at a Waffle House in Dothan. Since he was off to work a great deal of the time I was around, I didn’t get to know him as well as I would have liked but the gist I got was that he was doing all he could to provide for himself and was looking for a place closer to work where he could settle in for a while.

Nemo, as I said was on a walking trip from Indiana. He had set out to walk a thousand miles with his destination Saint Petersburg, FL. Nemo is an artist who works with items he finds in nature. Along his journey he has created works of art that remain in place wherever he creates them. Some are made using fallen leaves, moss and twigs, so when the wind blows they are gone from view but not from memory, or in some cases a digital record. Similar to my own journey, Nemo’s is deeply spiritual in nature and it is his hope to publish his artful sojourn someday. After his R & R break at Heaven’s Way, he plans to be back on the road soon for the last two to three hundred miles of his trek.

As often happens when people find out I am a pastor, Tina opened up to me about her troubled past. Though I want to be careful not to divulge anything that may have been spoken under the assumption of confidentiality, she admitted that leaving Indiana was like running away, something she needed to do to get her head on straight. She was so thankful to have found a place like HWBC where she found such peace. She told me that while she knew she couldn’t stay forever, the notion of leaving this peaceful haven brought tears to her eyes.

Wayne had his own troubles back home; having lost much, he is fighting his own demons but looking to make a fresh start. With an appearance similar to Hulk Hogan and a down home Midwestern mindset he is undeterred by his circumstances. Working as a dishwasher in a local Mexican restaurant he has managed to convince his employer that he should pay him a salary and let him work whatever hours needed to get the job done. Thus he goes into work for a couple of hours three times per day, doing morning prep, then cleanup after lunch and dinner. I have never seen anything quite like this arrangement but since it works well for both employer and employee, everyone is happy.

While each of my fellow travelers will testify to faith in Christ, none of them look or act much like the folks I have gone to church with over the years of my Christian walk. I would say, with the certainty that none will not be offended by this, that they are all aware of their brokenness, comfortable with their imperfections and joyous in the knowledge that God loves them, cares for them and is at work in them, accepting them just the way they are. What made this brief encounter so thrilling for me was that not one of them was wearing a mask. There were no facades, no pretense and no false holiness.

Aside from these fellow travelers, I found much the same in our host and hostess, Robert and Alicia, as well as all those who gathered for church, both Sunday morning in Alford, and Sunday afternoon in Cottondale. 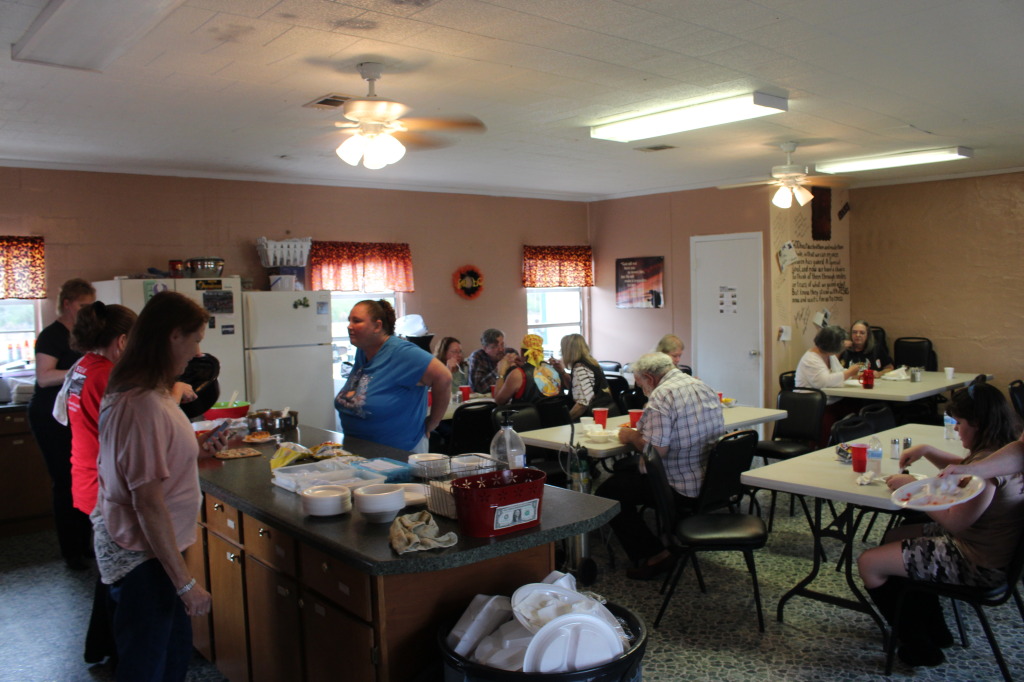 While I may not have been everywhere and seen it all, over the years I have had opportunity to travel and visit many churches of various flavors and denominations but I have never seen anything like I did last weekend. In Alford, the sponsor church for Heaven’s Way, I saw very traditional Southern Baptist ladies in dresses with classic church lady hairdo’s worshipping side by side with tattooed women in jeans and black leather. I saw Southern gentlemen in coats and ties greeting and hugging long-haired, bearded bikers. In Cottondale, I saw many of these same people respond positively to a simple gospel message brought to them by a Yankee preacher. In other words, I witnessed what church growth experts have told me was impossible, but what I took as a foretaste of heaven.

Knowing not what lies ahead on this journey, I know that my brief stay and experience at heaven’s Way Biker Church will be cherished as a great highlight of my Emmaus Road Trip. Thanks for riding along with me in thought and prayer.