So after witnessing some very cool ministry in south Texas and starting to get a sense of a great movement afoot, I began to head north in order to continue west. Arrived in San Antonio the other day and spent some time concentrating on work matters trying to earn enough money to complete the trip. Spent a little time researching churches around San Antonio and discovered that there are a lot of churches here. According to Nazarene.org, there are Nineteen Nazarene churches in San Antonio. That’s more than in the states of New Hampshire and Vermont combined. That left me with lots of choices, but oddly, none of them were particularly close to where I was staying, well, accept for First Church of the Nazarene, but with so many newer churches, my expectation was that “First Church” would be kind of the old fuddy duddy church that tends to leave me cold. I’m looking for out of the box, cutting edge stuff, so First Church was the last place I planned to be today.

The fact is, since there is another Church Under the Bridge here in town, (which like the church of the same name in Houston, no longer meets under the bridge, since the city won’t allow it.) I had planned to attend services there. However, when I went out to dry off my bike this morning and start loading my gear, I discovered that someone stole my tank bag right off the bike last night. It was a little worn and I have actually thought about getting a new one, so the bag itself is no great loss, but it had a couple hundred dollars worth of stuff, like riding glasses, a couple pair of gloves, some tools and other miscellaneous items.

After filing a report with the hotel and the San Antonio Police, I was running a little behind schedule but I figured it was no big deal if I showed up a few minutes late so I plugged the address into my phone for navigation and dang, my phone said it couldn’t connect to the network and I knew there was no way I could find my way without directions.

By this point I was starting to get angry, but immediately those words from James popped into my mind; “Consider it pure joy, my brothers and sisters, whenever you face trials of many kinds, because you know that the testing of your faith produces perseverance.  Let perseverance finish its work so that you may be mature and complete, not lacking anything.” (James 1:2-4 NIV) This is a notion I have been working on truly embracing, not just after the fact; but, in the midst of the trial. So I began to pray, “Okay God, thank you for this trial, I rejoice in you and even in the fact that I was robbed last night. I’m figuring that you have a higher purpose that I can’t see just now, so I turn this situation over to you. Now, where shall I go to church this morning?” Right away, a map of the area with a blue line leading me to First Church popped into my head. I remembered that when I had looked at this map on the computer, it was supposed to take twelve minutes from my current location and it was now 10:23 and service started at 10:40, so off I went laughing to myself at the absurdity of it all. 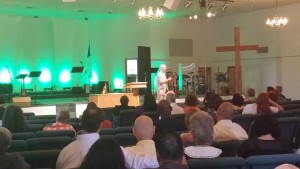 By the time I arrived at the church, I was expecting good things, and God did not disappoint. Walking into the foyer I spotted the coffee pot and went to grab myself a cup, so far so good. Upon entering the sanctuary I was handed a bulletin and received a friendly greeting. When I told the woman who greeted me that I was expecting good things because I felt God led me there she began to explain a few things about the church, their vision for the future and introduced me to the pastor who was passing by and then said she thought there was a guest preacher there to share about church planting. “Hah, very funny God” I thought. For those who don’t know me personally, I am a fifty-six year old man (57 by the end of the week, but I’m not about to call myself that just yet) who nearly burned out on two previous church plants and so far on this trip I have twice been invited to plant a church and twice more asked to stick around and help out in young churches. In each of these cases my response has been to smile, point out that I have a quest to complete, but promise to pray about it, which has effectively ended the discussion. For my un-churched friends, the “I’ll pray about it” line is the church speak equivalent of the parent who says, “We’ll see” when they don’t want to come out and say “no” to their kids.

Early in the service, the director of their compassionate ministry center, did a brief presentation, noting that they distribute food to about one-hundred, seventy families each week, providing approximately $42.00 worth of food at retail prices, for about $1.18 in actual cost, thanks to their partnership with the local food bank. Happy to discover that they had a separate 501 (c) 3 Compassionate Ministry, what impressed me most was the fact that the entire church was excited to hear about it and celebrated this wonderful work.

Pastor and Congregation of San Antonio First Church of the Nazarene

As the pastor stood to introduce the guest speaker, he shared briefly his own vision for planting churches and outposts throughout the city and again the congregation responded with enthusiastic amens. Then Scotty Young, the Church Planter, stepped to the pulpit and began to share about the work he is planting in the Heights section of Houston. As he described the work they are doing, their vision and mission, I was thrilled to hear how solidly Biblical and Christ reflecting it is.

Then he said something I had been waiting to hear. “God calls us to make disciples, not to build churches.” To be honest, his words might not have been exactly those; that is a quote I have heard twice before on this trip and I have been fully expecting God to confirm something to me by having a third person say it. I think Scotty actually put it a little more eloquently as he described his interactions with some of the people he has met in this new work, but the gist is the same.

It was such a blessing this morning to be reminded that God is still very much alive and active in the the Church of the Nazarene. To see that he is raising up men and women of all ages to bring the message of his love to people who need to hear and that many are recognizing the mission field just outside our own doors.

I’m nearly half way through this journey (at least the scheduled portion of it) and knowing that there is so much more to discover and learn, one things that has been made wonderfully clear to me is this: the less I depend on my plans and ability to make something happen, and the more I depend on God and trust him to lead, the better things go. I planned, God laughed, and I’m actually learning to laugh with him.