My how time flies when you are busy. I am now thirteen days into the Emmaus Road Trip and I simply cannot believe it. For the first few days I raced against the weather, trying to stay ahead of the Arctic cold that has been sweeping most of the country. As a result, I haven’t had time to post much here but now I have several posts in the works, so please check back often.

It wasn’t until my fifth night that I finally got a chance to camp and meet some interesting people. 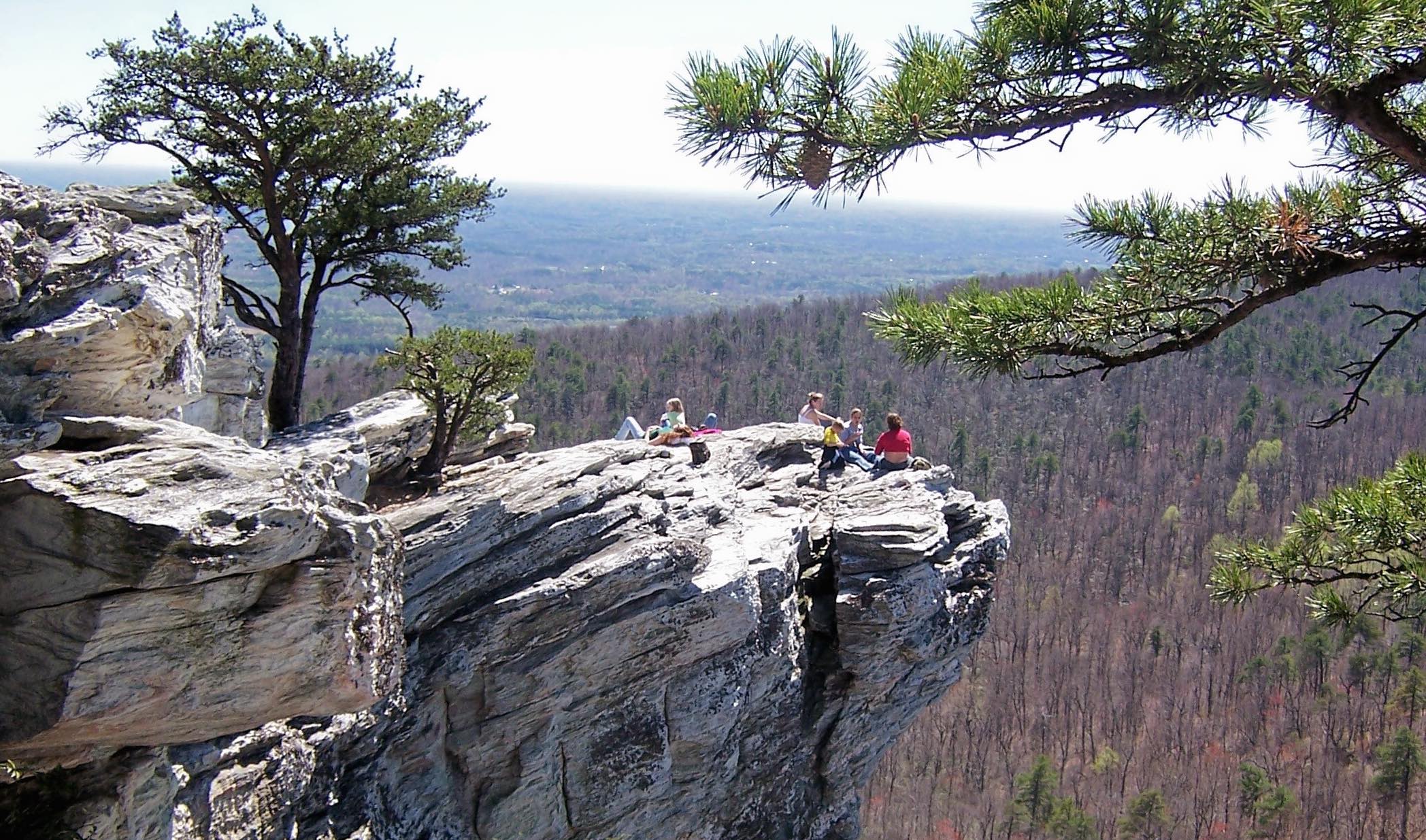 I spent last Sunday night at Hanging Rock State Park in Danbury, North Carolina. The campground host was a retired southern gentleman who travels full-time, serving as a volunteer at campgrounds all over the country. He was very warm and welcoming telling me to go ahead and pick a site that worked for me, and he would be around later to take care of the paperwork. While I was setting up my Nube shelter, (yes, that’s a shameless plug) three deer walked up behind me, casually foraging among the fallen leaves. A few minutes later my host stopped by but was unable to make change so he told me that the ranger would probably stop by as well.

As I continued setting up camp to prepare my own evening meal, a fellow camper stopped by. He said he tours on his motorcycle some as well and wanted to invite me to join he and his wife for a pancake breakfast in the morning. He had just barely left when the park ranger, Sam, came by to with change for my camping fee. As a ranger he is an avid outdoorsman so he was very intrigued by my hammock set up. With his wonderful southern hospitality, he apologized for bothering me, but wondered if he could take a closer look. I invited him to check it out and he was duly impressed. Our conversation then turned to motorcycles, adventures and family. We must have chatted for at least half an hour. I finally got a fire started and dinner made and settled in to relax for the evening. Sitting in my chair, looking to the heavens I thought, “man, it has been too long since I just sat and stared at the night sky.” just then, as if a special gift from the Creator, I watched a meteor streak across the empyrean.

In the morning, I decided to take Ray up on his invitation. Based on the warm welcome they extended, I was certain that this was going to be my first encounter with people who reflect the nature and character of Christ. Well, they did, but they didn’t. That is, they were very caring and hospitable, and very interested in what I had to share, but claimed no faith of their own. They were more welcoming than most New England Christians, and exhibited many Christ like characteristics, but it was more the result of their upbringing than their faith that made them so.

Following breakfast but before breaking camp, I decided to take a little walking tour of the rest of the campground. I came across a couple men who had been camping and hiking the area trails. They were packing up and one of them offered me their left over firewood. I thanked them but informed them I would be moving on as well. One thing led to another and suddenly we were into a deep political and theological conversation. It turns out they had both been in the Marines and been out now for fourteen years. This was the first time since his years as a Marine that one of them had slept in a tent.

It seems he was raised in a Christian home but during his time in the military wandered away. Apparently some of what he saw and experienced caused him to doubt or question. He became quite a student of history and from a military perspective he felt we became a right wing country, instead of a Christian country.

When I shared that as a minister I had run a transitional housing program for men in recovery, he immediately said what I know many people have thought; “I would have said, there you go, compromising the Gospel and watering down the truth.”

Our conversation jumped around a bit but as I recall it, he told me of a priest who directed him to the writings of an Egyptian Coptic who has helped him in his spiritual journey. God really does work in mysterious ways.

[Author’s personal note: I’m sorry I didn’t get your names, but as you both took my card in order to follow along with my journey, if you happen to read this post and feel the desire to correct any of the facts I have stated, please feel free to email me or leave your comments below.]

Heading to my next stop, I knew I was going to encounter Christ in his people, as I was on my way to see our first foster daughter and her family, who had moved to North Carolina two years ago. Their story follows in my next post.